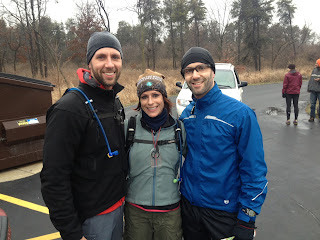 After working for 13 hours straight last night, on my feet all day with barely anything to eat, and then getting only 5 hours of sleep, my first thought when I woke up this morning was, "Why am I getting up to do this race?" So then I thought about how awesome I feel after doing one of these events, the sense of accomplishment and a good workout, and I also thought about the last one where I blew my teammate Don off because I was so tired, so I couldn't do that to him again. He knows Jiu Jitsu and he could kick my ass! Now that's motivation! Well I'm happy I did show up! I got to see some racers that I didn't expect to be there, and some other racers who I haven't seen in forever. One thing about adventure racing, it's a very tight knit community. Once you start racing and race often, you get to know a lot of people and these are pretty much some of the most amazing people I've ever met. This race was the start of an awesome day!

I decide I'm ready to race regardless of how tired I am and how sore my feet are from those uncomfortable work shoes that are too big for me. For those who don't know, I'm working part time as a server and the shoes we have to wear aren't the most comfortable. The race started with a mass start at exactly 10am, cutoff was at 11:30am, and we literally sprint to the first checkpoint. The trail we were on looked all nice and dry but it had a thin sheet of invisible ice layering on top of it. This was super fun because it made me run like a spaz and I felt like I could fall and break something at any moment. The first CP (checkpoint) was located at the end of a marsh. Well being a short person with short legs while running through a marsh isn't very easy. It was so uneven. It was like big hairy bulbous mounds randomly placed all over the area. I felt like I was kicking my feet up to my face just to get over these weird protruding hairy masses. We got out of there without me falling on my face, so that was a success. Then we started to pick up some speed since we were on a main trail with nothing big and hairy in our way. On our way to the next CP we saw Kim Heintz, our other Eyes of the World adventure racing teamie racing solo. She told us how her legs were already mangled due to a crazy hilly 10 mile run she did the day before. We adventure racers are stubborn sometimes and decide to do something stupid like that before a short race, I've been guilty of this many times and will probably continue this trend. I suddenly didn't feel so bad about my sore feet, and figured well, maybe we could slow this pace down. Of course that didn't happen. We sprinted on, and out of nowhere I heard a familiar voice. It was Eric Olsen, our other teamie racing solo being all sneaky sneaky. I had no idea where he came from, but we decided to stay together. We kept slipping and sliding up an down hills, jumped over icy logs, and pretty much nailed the next CPs. On the map there is what they call a madnaess control box, which means you can get the CPs in any order once you get into this box. We snagged all CPs and high tailed it back on a what seemed to be a neverending single track trail back west towards the train tracks to find the next CP, which got us closer to the finish. This is where I felt my sore feet and my sleep deprived state take over me. I felt like Don was trying to kill me with his lightning speed, I think I almost even started weezing. The Chai tea latte I had at Starbucks before the race also creeped up on me. I love you Starbucks, but my stomach did not agree at that moment! All I kept telling myself is "We're almost done, just push as hard as you can, and when you see those train tracks, you're almost done and you can yell at Don later." ;o) So we finally got to the tracks, and we had to cross them since the CP was on the other side. Well we thought that walking on the wooden planks of the tracks would be safer than the rocks, but nope! Those also had invisible ice on them and soon as I stepped on one, I almost fell and broke my neck. Luckily I caught myself before my face planted on the tracks, and we pressed on. We found the CP pretty quickly even though Gerry....race director of High Profile Adventure Racing, found it before us because he's just plain awesome...and we headed back to the trail. As we popped out onto the trail, I tripped over something which I do a lot, and totally rolled my ankle. Luckily I'm a clutz and do this often so my ankles are used to the abuse and it doesn't even affect me. We headed out sprinting (again) along the trail. Somewhere along this superhuman trail run we lost Eric, but him being so sneaky, he reappeared again and ran with us down the rest of the trail. He called us gazelles because we were so fast, but him appearing out of nowhere twice, he's like a freakin magician. We ran as fast as we could toward the finish. I was finally over my tired mind and body, and gave it all I got to get back.We crossed that finish line at 53 minutes and Don mentioned to me that it it's always good running with me because he tries to keep up with me. I told him "Well I'm just trying to keep up with you!" So apparently, he sets a pace, then I up the pace, then he keeps up with me and he ups the pace, so I keep up with him and I up the pace...and so on...you get the idea. So we just keep getting faster and faster without realizing it. No wonder why I felt like I was dying!!! It was a good thing though! It pushed us harder than if we were racing alone, and proved that we can navigate well together while we're sprinting like crazy people through the woods! It was an all around great day, for a great race, with some great people!